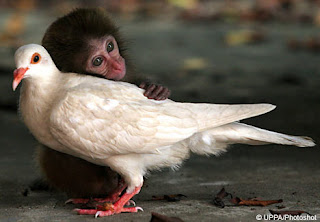 When I was a teenager I was in the jock crowd, but my closest friends were a bunch of skaters with multi-colored hair. It was an odd grouping, I would not have naturally made those friendships. But we were Christ-followers and we had more in common than we initially thought. I was reminded of that when I read an article about the picture above. It's about a monkey that was abandoned by his mom and ultimately became close friends with a pigeon. Sounds like those 'after-school' movie specials they used to have on ABC. Anyway, moving along. Without going into details, use google for that, the 3 week old monkey became healthy once he made this unlikely friendship. He is eating and doing great. Friendships are important! Take a risk this week, go out on a limb (bad pun), and pursue other godly people to do life together with. You'll find that your life will be healthier and more enjoyable than 'going it alone.'