Check out my authentic U.S. flag... 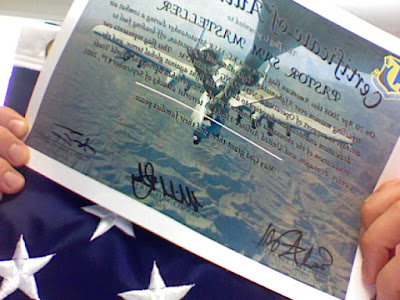 My good friend Roger Burke recently got back from Kyrgyzstan where he was serving with the military in the ongoing war on terror. He sent me this flag that was flown in battle on April 20, just one month ago, which is pretty sweet. I could buy a flag in the local hardware store and it would have meaning, but there is something special about a flag that was a part of a battle. There is a story that goes along with it. It's similar to our lives. Something different happens in our lives when we are used by God is this epic battle between light and darkness. When we are used by God for His Kingdom, it becomes part of our legacy and we become a part of His. The reading for today was found in Psalm 145:4 (MSG), which says, "Generation after generation stands in awe of your work; each one tells stories of your mighty acts." The devotional called 'Planting for the future' said, "People are created in God's image as spiritual beings who will live for eternity, either with Him or apart from Him. If you invest in people's lives, then your legacy becomes like a giant oak, providing life for generations to come."
Like the flag I got in the mail today, I pray that my life would represent more than just a symbol. I pray that it would represent a legacy of encouraging others to greatness in God. I want my life to ooze(?) Jesus and be an example for generations to come.